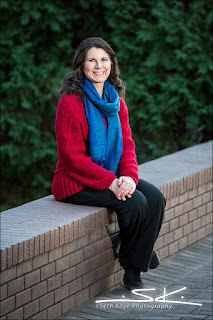 Michele Barker had one of my dream jobs, working as a costumed interpreter at Old Sturbridge Village. There she found her inspiration for her historical novels while mucking out stalls and milking cows.

Today she’s here to talk about her second book, Mending Horses, which Kirkus praises for its nuanced characters, fluid writing, and true sense of history. Mending Horses was a 2014 Kirkus Prize nominee and was listed by Booklist as one of the 10 Best Historical Novels for Youth for 2015.
Thank you so much for being my guest today, Michele!

Thanks, Linda! I’m delighted to be here!

Mending Horses is the second book in a series, though each title could easily stand alone. The first book, A Difficult Boy, starred Ethan, a young apprentice who is roughly used by his master. Mending Horses focuses on Daniel, Ethan’s fellow apprentice and an Irish immigrant. Michele, what made you want to explore Daniel’s story?

At the end of A Difficult Boy, Daniel is out on his own for the first time in his life, after having spent half a dozen years as an indentured servant. He’s always been told what to do and has never had a chance to make his own decisions. So I felt he’d be at kind of a loss about where to go with his life and would have a lot of learning and growing up to do. I was curious about how he’d manage in the world, so I decided to follow him and see what would happen. Besides, I really missed Daniel after I finished A Difficult Boy! 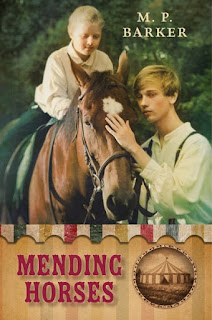 Your first book maintained a single point of view, but Mending Horses takes multiple viewpoints, opening with a look at Daniel through the eyes of one of the book’s villains. Why did you choose to tell your story this way?

Part of the reason for the multiple voices was necessity. The book has three plot lines that eventually intersect—or, rather, collide. To deal with the separate plot lines, I needed to use different points of view. Mending Horses is also a more complicated story, with multiple relationships that needed to be developed, so it felt natural to look at those relationships from a variety of viewpoints. It was fun to experiment with different voices and try to make each one distinctive and recognizable.

Daniel is only one of your book’s main characters. The other is Billy, another Irish immigrant who is running from an abusive father. Why did you bring Billy into Daniel’s story (or is it Daniel into Billy’s story?) What is the dynamic between the two characters?

Billy is a natural troublemaker, so introducing this character seemed like a good way to add some conflict and tension to the story. I also thought Billy would be a good foil to make Daniel take a look at his own shortcomings and biases. In dealing with Billy, I wanted Daniel to confront his own prejudices and question his strongly held beliefs about people’s roles in society. By overcoming his differences with Billy, Daniel learns a lot about himself and makes some major changes in his outlook on the world.

Your description of Daniel’s wild dance with his horse Ivy was breath-taking. Have you ever seen someone interact with a horse this way? What is Ivy’s role in Daniel’s story?

Thank you! I based Daniel’s manner of playing with Ivy on a girl I’d observed at a riding stable where I took lessons many years ago. She had a very special relationship with one of the horses, and she would take him out in the paddock and “dance” with him (not quite as wildly as Daniel and Ivy, though). Their joy and playfulness was delightful to watch. As I was researching the book, I also watched a lot of online videos of horse trainers, including Klaus Hempfling (http://www.hempfling.com/), who works with difficult horses and has an incredible ability to bond with them. He, too, “dances” with the horses he trains. His videos were another source of inspiration for the scenes with Daniel and Ivy.

When Daniel was an indentured servant, most of the humans in the household either mistreated or ignored him. For many years Ivy, the horse he was assigned to take care of, was the only creature who seemed to care about him, and the only creature he loved. Ivy was also the only creature with whom he could be playful. When he managed to sneak away to play with her or ride her, he could briefly escape the drudgery and abuse of his daily life. She was the one bright spot in a dark and dismal life. For Daniel, she represents freedom, love, and friendship. She’s also his teacher. The things he learns about equine behavior from watching and working with Ivy help him become a horse whisperer.

Daniel and Billy come under the protection of the peddler, Mr. Stocking, and the three of them join a circus. Circuses are so fascinating! Was this element always a part of the story as you envisioned it? How is Daniel and Billy’s circus different from a modern circus?

I knew Daniel would get involved in some job involving horses because they are so important to him. At first I thought he might join the military, but that didn’t seem right for his personality. The more I thought about it, the more a circus seemed the perfect fit; it would give him an opportunity to work with horses and also to develop his own talents. And a circus gave me lots of opportunities for unusual characters and humor. Besides, the research was so much fun!

In the 1830s, the modern circus was just starting to evolve, so circuses included a lot of things we don’t normally associate with them today, like opera singers and theatrical performances. At first, American circuses were primarily focused on equestrian acts. In the 1820s, they began to include acrobats, menageries, and other performers that we now associate with circuses, but they were still a long way from the circus we know today. They were often considered disreputable forms of entertainment, and in New England were often outlawed or discouraged through expensive licensing fees. But they managed to get around the laws and perform anyway.

Many people romanticize the agrarian culture of the 1830’s, but Mending Horses doesn’t paint a pretty picture of this era. What are your thoughts on this period in history? Why did you choose to write a story set in this time and place?

Like any time period, the 1830s had positive and negative elements. But people tend to forget the negative—that there was a lot of bigotry, that women’s roles were confining and stifling, that work was often physically hard and dangerous, and that for some—particularly immigrants and African-Americans--living conditions could be brutal. It was also a very exciting time—railroads were just beginning to crisscross the country, Americans were exploring the West, New England was becoming an industrial powerhouse.

I chose the time period and setting because of my background at Old Sturbridge Village, which depicts New England in the 1830s, so it was a familiar locale and era for me. Choosing a time period I already knew well definitely made the research easier!

You obviously have an intimate understanding of the 1830’s. Can you tell us about your background as a historian and how your research process informs your story?

I was a history and English major in college and did a master’s degree in Historic Preservation. Besides working at Old Sturbridge Village, I also worked as an archivist dealing with a local history collection in Springfield, Mass. My background definitely came in handy when doing the research for the story. Working at OSV, I learned a lot about the physical environment of the time period and about people’s daily lives, their attitudes and concerns.

There’s a lot of back-and-forth between the research process and the storytelling. Sometimes, the story idea comes first, and I’m doing research to answer a specific question, like what sorts of stunts performers might do in a 19th-century circus. But sometimes it’ll go the other way, and I’ll stumble across something in my research that will give me an idea for a scene or character. For example, I learned that there was a huge celebration for the opening of the railroad in Springfield, Mass., right in the middle of the time period I’d chosen for my story. That event was too wonderful not to use! So I created a scene around that event in which one of my characters decides to go to work on the railroad.

What are you working on now?

I’m working on a story about a sea captain’s wife and daughter and how they survive after he’s lost at sea. It’s set in Salem, Massachusetts during the 1840s and 1850s. The research for this one is very challenging, involving 19th-century horticulture, botanical illustration, seafaring, the China trade, and more. It seems each story I write is more difficult than the previous one! You’d think they would get easier as I go along, but the opposite is true.

It sounds delicious! I can’t wait to read it.  Thank you so much for joining us today. To find out more about M.P. Barker, you can also follow her on facebook or on Twitter.

Posted by Linda Crotta Brennan at 10:13 AM

Wonderful interview, Linda! I've long had M. P. Barker's books on my 'To Read' list and now, more than ever, I'm hoping to get to them ASAP.

very nice interview, Linda. I used to fantasize that some day Barbara Walters would interview me. But she's got competition in the CB world!

As always, a fascinating interview with an author that I didn't know about before. I can't wait to get my hands on Michele's books. Thanks for sharing.

Thank you, Cathren and Cheryl!
I'm not sure that Barbara Walters is worried about the competition, but I appreciate the comparison!
Cheryl, with your deep interest in history, I'm sure you'll enjoy Barker's books.

Excellent questions, Linda. I think Michele's point about people forgetting the negative aspects of a past period is a good one.

This interview was really interesting. Her books sound terrific and blends history with a coming of age adventure.
Marilyn Salerno