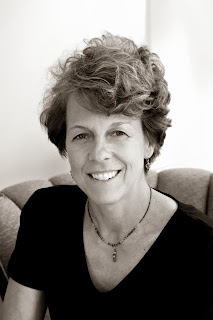 Karen wanted to be a writer since she was in fourth grade. She wrote her first (highly melodramatic) novel when she was sixteen and took journalism in college. When she graduated, she wrote for newspapers and magazines, doing the last interview with tennis great, Arthur Ashe, before he died.

But she yearned to write fiction. Finally she left journalism to write full time.
We’re glad she did! Her titles include the A Million Miles from Boston and Tall Tales. Today we’ll be talking about her sports novel for girls, No Cream Puffs.

It’s the story of 12-year-old Madison Mitchell, the first girl in Michigan to play baseball on an all-boys' little league team. Madison must deal with all the pressures of being a trailblazer. What will her friends think? Will the boy she likes still be interested if she strikes him out? How will she deal with the unwelcome publicity?

Karen, could you describe how the book evolved? What came first, the plot or the characters? Did you work from a detailed outline or were you a “pantser”?

The writing of every book is always different for me (although it’s always hard!). But one thing is true about every book I write: I always come up with the internal arch first. As a writer, mom and reader, I’m most interested in the inner life of kids. How they deal with trauma. How they feel about the inevitable changes that adolescence will bring. In No Cream Puffs, I knew I wanted to write about a girl who was “searching” for a father who didn’t want her. I also knew that I wanted to write about the drama of how it feels to “lose” your best friend, if only temporarily. That my main character would play little league came later. And yes, I am a pantser. No outlines for me!

You capture Madison’s conflicting feelings about playing ball with the boys so well. Were you an athlete as a child? Did you play baseball or another sport?

I loved sports and played everything I could. Like Madison, I was the first girl in my part of the state to play little league with the boys. A lot of what happens to Madison is fictional; however, a lot I took from my life, too. Like Madison, I was a pitcher, played short stop and batted cleanup. And like Madison, I struck out the star of little league in the championship game. I was a natural athlete, but unfortunately I didn’t have the head for it. I was filled with a lot of doubt and conflict. A headcase! I don’t think that people who knew me back then realized this about me. And so this is one of the themes that I wanted to write about in No Cream Puffs – what it’s like to be good at something, a trendsetter, and yet have ambivalence about it. I quit baseball after just one season and turned to competitive tennis, which I played until I was 18. I was a headcase in tennis, too!

I wasn’t athletic as a child. In fact, I was the last one picked for any team. I always envied girls like Madison, but this book gave me a glimpse of what an athletic girl’s struggles might be. How do young readers react to Madison? What do you hope a young reader might take away from your book?

I get more emails about Madison and No Cream Puffs than any of my other books. Madison is at an age when girls aren’t always comfortable with the opposite sex, so I think that many of my young readers like reading about a girl who has so much direct contact with boys! Others like her spunkiness, sympathize with her and her fight with her best friend, and cheer for her against Billy. Underneath all of this, I want girls to know what it was like before there was such a plethora of sporting opportunities in our country. Today’s girls don’t have to worry how to be athletes. Nor do they have to worry that their sporting teams might go away. It wasn’t always like this.

I love Madison’s mom. She blazed trails in her own legal career, and she struggles to give Madison the room she needs to make her own choices about baseball. Was Madison’s mom drawn from anyone you know?

In early drafts I really struggled with mom and what I wanted her character to be. I knew that Madison would have a push-pull relationship with her. I’d been reading a lot of female adolescent development books and was fascinated by the idea that a girl’s primary struggle in adolescence is learning to separate from her mother. Still, my own mom and other mothers I knew kept getting in the way. Then one day, Mitali Perkins, who was in my critique group, suggested that mom should have part of me in her. And something about this helped free me, and I saw her character more clearly.

Huey, the has-been rock star next door, is a unique figure in middle grade literature. He becomes a sort of father figure to Madison, even though he isn’t a very responsible adult. Can you tell us more about this character?

I was very conscious in this book of not doing the expected. For example, I could have written a story where the main character is a star, everyone is against her and she “fights the establishment” to get what she wants. In stead, I made the primary struggle an internal one. Likewise, it seems natural that Madison’s father figure would be the baseball coach or someone who was a good athlete. In stead, I introduce Huey. And I did this because I wanted to show that Madison wasn’t struggling with baseball as much as she was struggling with expectations and fame, something Huey knew a lot about. Also, he was a screw up. So, he was a good alternative to her mother who Madison thought always did everything right.

Madison’s brother David is such a wonderful mentor for her. And she has a marvelous relationship with fellow teammate, Brett. Did you have any strong male mentors in your life? Do you see any parallels between them and these characters?

My dad was a terrific sports buddy when I was growing up. He taught me to play ping pong, basketball, football and baseball. He was a serious, competitive man who valued sportsmanship and winning. He never seemed to tire of playing with me, especially after I started beating him at everything! Because of him, I was very comfortable around men and boys. I realized, at an early age, that what they valued most was winning. The boys on my baseball team liked me because I was good and helped the team. The tennis coaches liked me because I was coachable and won. There were no mind games and no drama. And so, yes, I carried over these experiences when I crafted Brett and David’s characters. They both like Madison and they respect her because she’s good.

A Million Miles from Boston is about Lucy, who’s had a difficult school year, and whose Dad has a new girlfriend. Tall Tales is about Meg, who struggles to keep her father’s alcoholism secret. Where do your book ideas come from? Do you see any recurrent themes or strands that run through your books?

All of my novels seem to deal with girls who feel alone. Lucy misses her mom who died six years earlier. Madison is the only girl playing baseball with the boys and Meg has just moved to a new town and desperately wants a friend. I think that this feeling of being alone is something with which I’m quite familiar and so it feels natural to write about this. Over and over and over! Many of my story ideas come from personal experience. But I also have kids in middle school and high school and so I’m constantly listening to them and their friends and trying to pick up ideas. Ian, the annoying boy in A Million Miles from Boston, came to me after listening to my middle child talk about an annoying boy at school. Meg’s story is based on my husband’s childhood. One of the things I love about writing is taking what I know and experienced and setting it in a different place, with a made-up plot, and seeing what happens.

You work with an editor I greatly admire, Wendy Lamb. What is it like to work with her? Can you tell us a little about the editorial process?

Wendy is an incredible editor. She has a way of strengthening my strengths and building up my weaknesses. My first editorial letter from her, about Tall Tales, was 14 pages long, single spaced! I usually do anywhere from four to eight revisions for her. It’s worth it. She has made all of my books so much better. Typically she’ll break my novel down into individual threads, and she’ll make suggestions on how to change or deepen a particular thread. This is a very comfortable process for me since it’s the way I’ve always approached revision.

Are you working on something new? Can you tell us a little about it?

I’m fascinated by how competitive sports change and disrupt family dynamics. I’m just rewriting a novel about two sisters, one who is a star diver who wants to quit but her family won’t let her. I’m interested in how the younger sister, who narrates the novel, is affected by the attention and drama given to the older sister. I’m also working on a new project, about a 12-year-old girl with psychic abilities. It’s a fun story, something new for me, but also with a serious side. And I’m teaching a lot more now. In the winter, I’ll be running a writing-for-kids adult workshop at Grub Street in Boston.

Thanks for having me, Linda!

Thank you so much for being my guest today. For any readers looking for a great book about girls and sports, I highly recommend No Cream Puffs by Karen Day. You can find out more about Karen and her work at http://klday.com/books/.

Posted by Linda Crotta Brennan at 4:56 AM 2 comments: 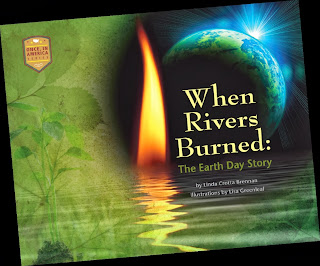 KidsFaithGarden Guest Blog
Today is a busy day for me. I'm also appearing as a guest blogger on Nicole Lataif's delightful KidsFaithGarden website with a post on using imagination to promote kindness.
http://bit.ly/1e8Z0zz. I invite you to come join the discussion!

Finally, I'd like to leave you with this musing on fall:

Late September
I eat lunch under the glowering skies of late September.
Silence surrounds me until
I bite the succulent flesh of a peach,
Sweet remainder of summer, releasing
The warble of goldfinches.
Out of the corner of my eye I catch
The flit of a wing,
But it is only a yellowed leaf twisting in the wind.
Overhead, a winter jay calls.