Interview with Diane Mayr, author of Kids of the Homefront Army 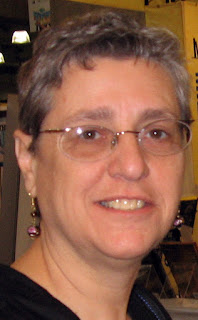 Today I have a special guest, Diane Mayr, here to talk about her online poetry collection, Kids of the Homefront Army: Poems of World War II America.

Diane is a multi-talented author, with a varied career. Before we get into your poetry collection, you just received some exciting news about your Thanksgiving book, Run Turkey, Run?

Yes, that's right. Run, Turkey, Run! will be opening off Broadway as a musical in the fall of 2012. By "off Broadway" I mean way, way, way off--downtown Portsmouth, NH! It will be performed at the Seacoast Repertory Theatre http://www.seacoastrep.org/. A talented young man by the name of Miles Burns, is the director of the children's program there. He used my book as a starting point and wrote a script and a score. It should be a fun production! I'm sure to have more news closer to the opening, so stay tuned...

Can you tell us about Run, Turkey, Run? 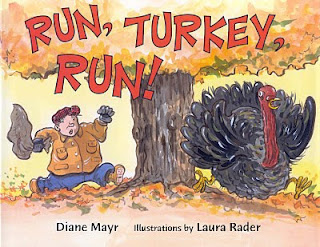 I was a children's librarian from 1986 though 1997 (I'm now an adult services librarian/assistant director). Back then, there wasn't a whole lot available for the story hour crowd that I thought my preschoolers would understand. Books about thankfulness went over their heads. The same for books about pilgrims. I wanted something that would be fun, and that would allow little listeners to participate. Since I couldn't find the book I needed, I wrote it myself! Ask my critique group--during my children's librarian days, I wrote a lot of holiday books! Basically the story is very simple--turkey needs to hide from the farmer, so he looks for places right in the farmyard. When that doesn't work, he heads for the woods. The book has everything you need for a preschool audience--it's silly, it requires the listener to answer questions, it's repetitive, and it has a happy ending. The illustrations by Laura Rader are perfectly suited to the story.

(Here's a little something for beginning writers--if you believe in your work, continue to submit it. Run, Turkey, Run! was rejected more than 2 dozen times! I used to say to myself, “If I ever get it published, I could die happy.” I believed in the book. I knew it would be perfect for story hour. And I wanted to die happy, so I kept submitting it.)

Our readers might want to check out Diane’s Littlebat’s Halloween Story, too.

Diane, you also have a number of nonfiction books available on a range of topics from apples to money. I wondered how you balance writing fiction and nonfiction. Is your approach to each genre different? Which do you prefer?

At the risk of sounding flaky, I'll say that fiction is a gift. Sometimes it seems as if fiction and poetry come from someone I don't know--”Did I write that?” Nonfiction is more like work. But, since I love research, it's fun work. I definitely prefer fiction and poetry right now. Writing nonfiction releases my “timidity” demons--Will I be able to research as much as I think is necessary? What if I leave something out? What if I write something and someone says, “Hey, you got it all wrong!” How scary is that?

Of course, if you're writing historical fiction, you have to get the history right, too! But the pressure is more intense with nonfiction, and, as most of the nonfiction work is on assignment, there's the added pressure of guidelines and deadlines. 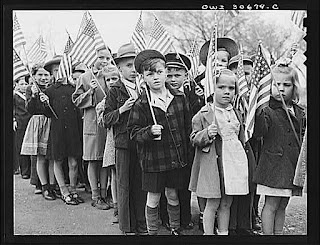 Diane eschewed print with her current project, Kids of the Homefront Army: Poems of World War II America. Instead, she is using new technology to revisit history and publishing this collection of WWII poetry as a blog. Diane, could you tell us a little about why you chose this medium?

The truth? I could no longer wait to be discovered by an editor who shared my vision.

Before I wrote the book, I was in contact with many people who were kids during the war years. Some of those I interviewed, or those who filled out questionnaires for me, have passed away. I felt like I was letting them down by not getting the work published. I wanted to tell their stories, and to repay the favor they did for me by sharing their stories.

I started on the project in 2001. I had planned on writing a simple nonfiction book about kids during WW II. I abandoned the project for a while, and then had an “aha!” moment in 2006 when I realized that the story I needed to tell had to be told through poems. Everything fell in place and I wrote like crazy--sort of like I was possessed. (I warned you about sounding flaky! Linda, I was glad to read your interview with Padma Venkatraman who also mentioned being possessed!) I tried to sell the book to trade publishers and a lovely local publisher, but I ended up thinking that the editors' visions weren't the same as mine. I decided to remain true to my vision for the book and that if I were to die happy, I'd have to do it on my own. So, being a fan of blogs (I have a number of them), I decided to post the book serially. I publish two poems a week, on Mondays and Fridays, at www.homefrontarmy.com. 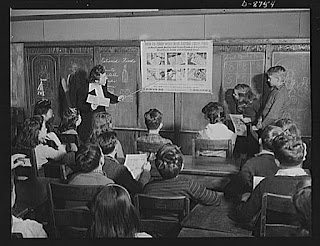 Diane’s poems take on a variety of viewpoints. Some are written through the eyes of a child. For example, we hear young Eddy’s voice in A General. Can you share that poem with us and tell us a little of what inspired it?

I’ve been working real hard.
It’s nearly the end of the school year
and if I can earn a few more points,
I’ll get to be a one-star general!

Won’t Mom beam when she sees that!
She’ll say it was worth all those hours
helping me tie up bundles of papers
and crushing tin cans.

Grandpa will get tears in his eyes
when he sees my commission.
It was because he bought
so many savings stamps off me!

But I’ll be proudest of all!
Who cares if I got a D in 'rithmetic?
Or that teacher wrote on my report card,
"Eddie needs to pay attention."

No one will care
when I’m a general!

WW II was truly a shared experience. Everyone participated in the war in one way or another. For a kid, especially one who may not have excelled in other areas, there was the opportunity to make a contribution. That's the feeling I wanted to relay with Eddie.

All of the poems are from the point of view of a different child. They range in age from about 8 up through the teens. 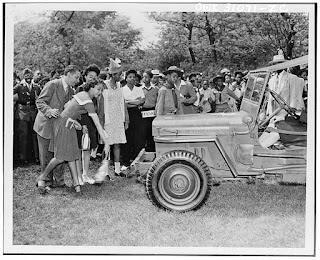 In another poem, we hear Sylvie who is leaving school and heading to California to work. She’s bursting with anticipation. Can you tell us about that poem?

Again, as with Eddie, Sylvie was presented with the chance to do something out of the ordinary and to make a difference. There's a lot of hard work ahead of her, but there's also the romantic notion California. The Hollywood Canteen and all those boys await! For someone who may not have cared for school, the increased need for women workers was the perfect excuse for leaving and going to work. 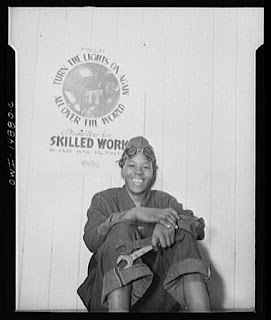 Some of your poems speak of sacrifice and the sorrow of lives lost, but others show another side of war. I was particularly struck by Marguerite’s poem, When The Lights Go On Again… Can you tell our readers a little about it?

This poem was inspired by a memory that someone shared with me. This person, a teen during the war, was able to get a good job only because the normal labor force was employed in the armed services. He told me that at the end of the war, while others were celebrating, he was thinking about how his job would be gone shortly. It was the same for women workers who were expected to go back to being girlfriends, wives, and mothers once the men came home from war. When I came across the photo of a young black woman worker, the poem came together. Who would have a job once the war was over? Not Marguerite.

Kids of the Homefront Army is illustrated with marvelous photographs, posters, and ads from the 40’s. Where did you find all this wonderful material? Did the photos spark the poems or did you start with the poems and hunt for photos to illustrate them?

Ebay! I started collecting WW II memorabilia, postcards, magazines, etc. almost as soon as I started thinking about the project in 2001. As for the photographs, most are from the Office of War Information collection of the Library of Congress. We are so lucky to have the Library of Congress make these materials available online. Great sources for the ubiquitous governmental posters are the online collections of the University of Maryland and Northwestern University Library. The internet is truly a wonder!

Many of the poems were inspired by the photos. Others were written based on stories I was told, and then, I would search out photos to illustrate them.

It's amazing to me how much I didn't know about the early 1940s before I started researching the WW II homefront. The photographs provide a visual for today's kids who are unfamiliar with the social life during the war. 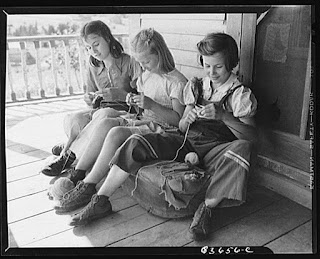 Things that kids take for granted today didn't exist back then. Shortages made life more difficult. Imagine life without rubber for the elastic in your underwear! (I've got a poem coming up on that topic!) Or being limited in the number of pairs of shoes you could purchase. Or imagine writing letters! How many kids today write letters outside of school assignments? It was a different world.

When did you begin Homefront Army? How long do you think your blog will run?

I wrote 80 or so poems in 2006, but I'm still adding new ones as I go along. I started posting in June of this year. I post about 8 a month. There are now about 90 poems, so, it will be nearly a year before they're all on the site.

Do you have any ideas for future blog projects?

Not at this point, although I started a book of poems about the great New England Hurricane of September 1938. I won't finish it because it is too depressing--so much death and destruction occurred. In 1938 there was no FEMA to help people recover and rebuild.

I'm using a Facebook page to augment the Kids of the Homefront Army blog: www:facebook.com/homefrontarmy . On the page I add related videos and links. Social media is a handy tool!

Are you working on any projects for traditional media?

No. What I'm working on most often is haiga (illustrated haiku and other short form poems). Some I post on my blog, www.randomnoodling.com, some are published in online haiku journals such as Notes from the Gean www.notesfromthegean.com.

Thanks so much for stopping by! We enjoyed hearing more about Diane Mayr’s work and about Kids of the Homefront Army.

Thanks for the opportunity to speak to your readers, Linda, I hope they will visit Kids of the Homefront Army, http://homefrontarmy.blogspot.com/and share it with others!

Posted by Linda Crotta Brennan at 8:30 AM 8 comments: