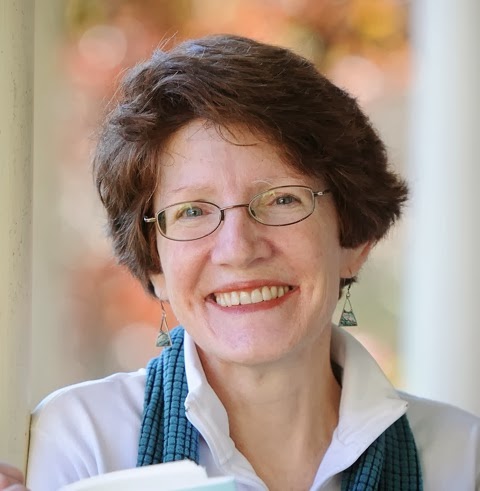 Kathryn Erskine is the acclaimed author of numerous intermediate and teen novels. She won the National Book Award for Mockingbird, a book about a young girl with Asperger’s Syndrome who must help her father deal with her brother’s death. Today, Kathryn’s here to talk about her latest novel, Seeing Red, which is sure to garner its own share of awards.

The young main character, Red Porter, grew up helping his dad fix cars for the family business in small town Stony Gap, Virginia. Now his father has died, and his mom has decided to move them back to her family in Ohio. Red is determined to stop her. He wants to stay right in Stony Gap, where his father’s family has deep roots.

Red’s efforts to save his family business go awry, driving a wedge between him and his longtime friend, Thomas. Digging into the past to help an elderly friend reclaim lost property, Red discovers the dark side of the Porter legacy. Seeing Red is a riveting story about family, friendship, and race relations. 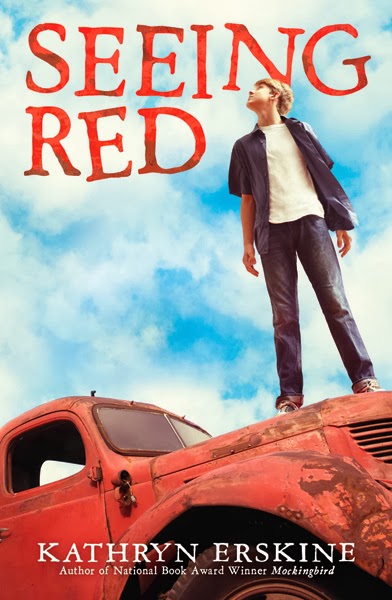 Hi Kathryn, welcome to Lupine Seeds!
You were born in the Netherlands, lived in Israel, South Africa, Scotland, and Newfoundland, and have now settled in Virginia. Seeing Red is set in Virginia, but did your experiences in any of those other places inform the book? How?
Witnessing apartheid in South Africa as a young child set the stage for this novel and my deep feelings about racism.  That continued in Virginia and Alabama in the late 1960’s and early 1970’s, when Seeing Red is set.  I explain it in detail in the book’s Author’s Note but when you learn those harsh lessons as a child, they’re hard to forget.

You were a lawyer for fifteen years before turning to writing. What drove you to make the change? Have your experiences in the courtroom influenced your work?
Being a lawyer has helped with research, which I’m very serious about, and analysis.  I’ve always loved writing but didn’t think I could make a career of it so decided to wait until I retired.  When my mother died, still in her sixties, I realized that you can’t wait to follow your passion -- you never know what’s going to happen.  I signed up for a local writing class and that was the beginning of this long, sometimes hard and frustrating, but ultimately beautiful journey.

Could you tell us something about your process? How did Seeing Red evolve from idea to finished manuscript, to published book?
Oh, my goodness, that is a very long story but the short version is that it went through a couple of publishers and a couple of dozen drafts before becoming a published novel.  It started as a voice in my head, like all my stories do, then more characters appear, scenes develop, and eventually I have an idea of what the story is about.  It’s because of the characters that I kept at this book.  They wouldn’t let me go.  It was almost as if it wasn’t my story -- it was theirs and they insisted I tell it.  The most important takeaway for any writer, or anyone really, is to never give up.  I started writing this novel in 1999.  It finally published in 2013.

This story deals with race relations, abusive parents, woman’s issues, guilt and redemption, and so much more. Yet it never feels heavy handed or didactic. Red, who can tell the model of a car just by the sound of its engine, is such a genuine character. He carries the reader along. How did you put yourself inside the mind of this twelve year boy?
I’m a closet actor.  :o)  Seriously, I have to become my character and see the world through my character’s eyes.  There are many ways of doing that.  I do extensive research about the time and the place and culture so I know how people behave in that particular setting.  I observe kids today, I remember kids from my own childhood.  For Seeing Red, in particular, I walked in the Virginia woods and observed the trees and rocks and creek, throwing stones and stomping on acorns just like Red did.  I sat in the type of desk classrooms had in the early ‘70’s with the attached desk with pencil groove and the seat with a place underneath for your books.  I listened to all the music on my playlist (which is on my website) and much more, and watched movies of and about the era.  I went to historical societies and museums, including the Robert Russa Moton museum in Farmville, Virginia, which shows the history of Massive Resistance in Virginia as if you’re living it.  I visited Rosenwald schools.  I talked with people who lived through that era.  I ate the food Red ate.  I watched the TV shows he watched.  I played Rock’em Sock’em Robots.  I did his chores.  I talked like Red, acted like him, and thought like him.  Basically, I was Red.

Red Porter is a sympathetic character who does some terrible things. How did you balance his guilt with his drive to make things right?
At his core, we know Red is a good person and wants to do the right thing.  We all make mistakes and he feels great remorse for his.  And he tries to make up for what he does.  Those are all admirable qualities.  It’s not that hard to forgive someone who’s earnest and truly sorry and tries to make things right.  If he -- or we -- can use guilt or any negative emotion to spur us into taking action for justice, that’s a good thing.

Secrets propel this story forward. How did you devise this vehicle for your plot? How did you manage to juggle the book’s complex plot strands?
Secrets are an element of the story because we all have them.  And it’s important to know that things are not always as they seem.  We often make judgments based on insufficient evidence.  We need to dig deeper, think critically.  For example, Red is mistaken about Mr. Reynolds based on assumptions and his own prejudices.  We need to get past that.  As far as juggling the issues, I use a software tool to help me organize my story and plot.  With that, I can try make sure the threads of the story are woven in a way that makes sense.

Have you gotten any reactions from young readers about Seeing Red?
Yes, I’m delighted to be receiving fan mail and reviews from young readers.  My favorite is from a girl who said she would’ve given Seeing Red a 5 out of 5 but had to give it a 4 because she was so mad when it ended since she didn’t want the story to be over yet.  I love that!

You’ve written about a boy with a math disability in The Absolute Value of Mike, a girl with Aspergers’ Syndrome in Mockingbird, a foster child in Quaking, and apartheid in Ibhubesi. What drew you to these topics? Do you see any common themes running through all your books?
One of the fun things about being an author is the variety -- you can write about anything!  I enjoy topics that might show young readers something they may know little about.  Reading a novel is an entertaining way of learning.  I think a common theme in my books is tolerance.  Understanding and appreciating people’s differences is important to me perhaps because of growing up in a variety of cultures and always being the different one myself.  And it’s vital for a functioning society.  Now that you mention it, the main character in my next book has albinism!

What’s next? I read some hints that the book you’re working on now will be set in Newfoundland. Can you tell us more?
Ah, well, I did write a YA novel set in Newfoundland but it needs work.  More recently I’ve been working on an adult novel set there.  What’s actually next is The Badger Knight, a Middle Ages adventure novel that Scholastic is publishing this fall.  I love the Middle Ages because it’s almost like fantasy with knights and longbows and superstitions but it actually happened which makes it even more interesting to me.  The main character, Adrian, has albinism and dealing with a difference like that in the Middle Ages could be more than uncomfortable; it could be dangerous.

Is there anything else you’d like to share with our readers?
I’m so grateful to my readers and hope to keep writing books they enjoy.  I have several projects going right now -- some picture books, a novel in verse, a teen road trip novel, and two others that are still in that amorphous phase where the characters are talking to me but I’m not exactly sure where they’re going yet … but I hope to find out soon!
Thank you so much for hosting me on Lupine Seeds, Linda!


Thanks so much for being my guest! Readers can find out more about Kathryn Erskine and her books at http://www.kathrynerskine.com/Kathryn_Erskine/Home.html

And thanks to all my readers for stopping by. I wanted to share my good new before I close. The Children's Book Council has named When Rivers Burned: The Earth Day Story as a 2014 Outstanding Science Trade Book and a 2014 Notable Social Studies Book.
Posted by Linda Crotta Brennan at 6:57 AM 7 comments: