Alexis O'Neill on The Kite That Bridged Two Nations 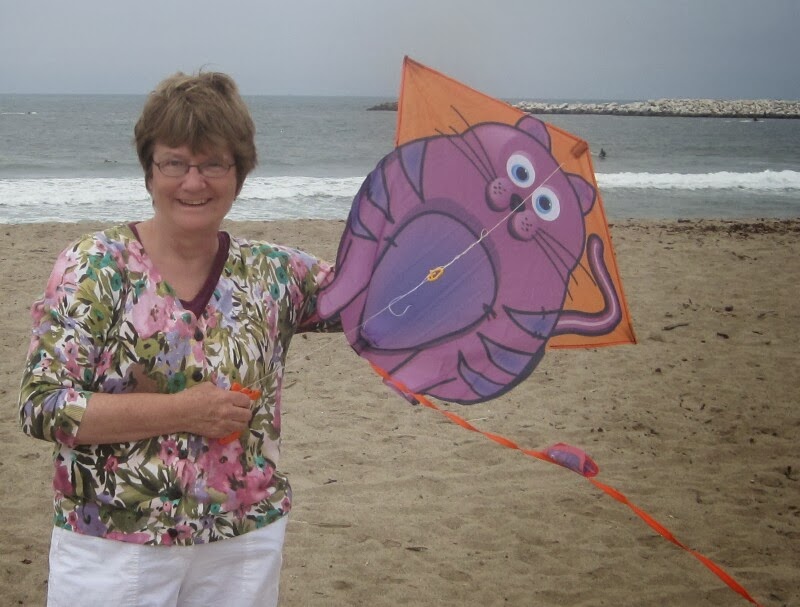 Just out! A contest! Thanks to Alexis' generosity, anyone who leaves a comment on this blog before January 31 will be entered in a drawing for a signed copy of  The Kite That Bridged Two Nations.

Alexis O’Neill is an award-winning author and an instructor for the UCLA extension Writers’ Program. Her work includes the acclaimed picture books The Recess Queen and Loud Emily. Today she’s here to talk about her recent historical fiction book, The Kite That Bridged Two Nations.
Homan Walsh loves flying his kite along the great . Then men come to town, planning to build a bridge across the river, uniting the and . But how will they get the first line across the wide and raging water? When they hold a contest to see who can fly a kite to span the river, Homan rises to the challenge. 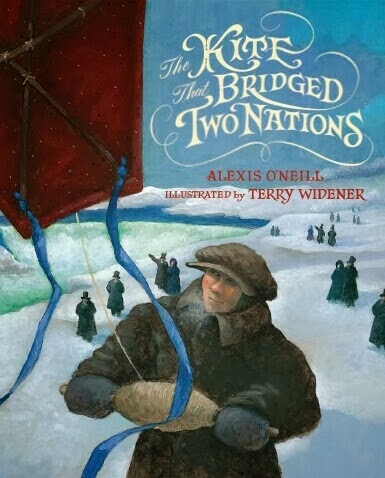 Alexis had generously offered a signed copy of her book, The Kite That Bridged Two Nations.

Welcome to my blog, Alexis!
I read that you got the idea for The Kite That Bridged Two Nations from a minor incident mentioned in David McCullough’s The Great Bridge. Could you tell us about that? What excited you about this idea?
The 19 th century time period, the location of , that a string could actually start a bridge, the boy’s determination to succeed in spite of tremendous odds – all of this really got my juices going!
Actually, the idea for the story was suggested to me out of the blue by an editor I had never met, from a publishing house I had never worked with. But it turned out that we had both read The Great Bridge by David McCullough about the building of the by engineer John Augustus Roebling. She was attracted to a short anecdote about how a boy’s kite string began the first suspension bridge over the in 1848. That bridge was started by Roebling’ leading competitor, Charles Ellet, Jr., but completed by Roebling when Ellet quit the project in a money dispute. The editor asked if I’d be willing to write a picture book about the kite contest. And I replied with the four words a writer should say when someone asks this: “Why yes, of course!”  (By the way, the original editor rejected my story in the end, but the next editor I sent it to bought it!)
The book is based on a true incident. How much information were you able to uncover about the real Homan? How did you use it to develop the character of Homan?
Other than one interview published at the end of his life with an account of the contest, little was written about Homan Walsh, so I had to go sideways to fill in the blanks. I used census data to find out where he lived and with whom and what kind of jobs he held. A passport application gave information on his height and eye color. Graveyard headstones confirmed birth and death dates. Reports in newspapers of the time attested to his perseverance in his extraordinary kite-flying feat.  And reports from a bridge commissioner corroborated other accounts of Homan’s success and the prize that he was awarded. Secondary sources filled in essential information about the bridge engineer, the weather, terrain, and the times.
What were your challenges in finding a narrative thread for the book’s dramatic arc? How did you solve them?
The true story has a natural, dramatic arc. But finding the narrative thread was a major stumbling block for me. At first, I wrote the story as straight nonfiction. That wasn’t satisfying. Next I played with various points of view, writing poems in the voices of the kite, the ferry, the bridge, the falls and more. And though this was fun to read aloud as Readers’ Theater, the work didn’t carry an emotional punch. In fact, I got so stuck, I traveled back to for inspiration. Finally, I went away for a week with a writing friend where there was no access to the Internet or other distractions. I read, took notes from my notes, thought, and then wrote what became the first draft for the published book. The key element missing in my other attempts was emotion. The only way I could get to the emotion -- Homan’s the exhilaration of flying a kite, the power of the falls, the thrill of overcoming obstacles -- was through historical fiction in Homan’s point of view.
The Kite That Bridged Two Nations has such a vivid sense of place. I know you once lived in , but you live in now. What did you do to immerse yourself in the book’s time and place? 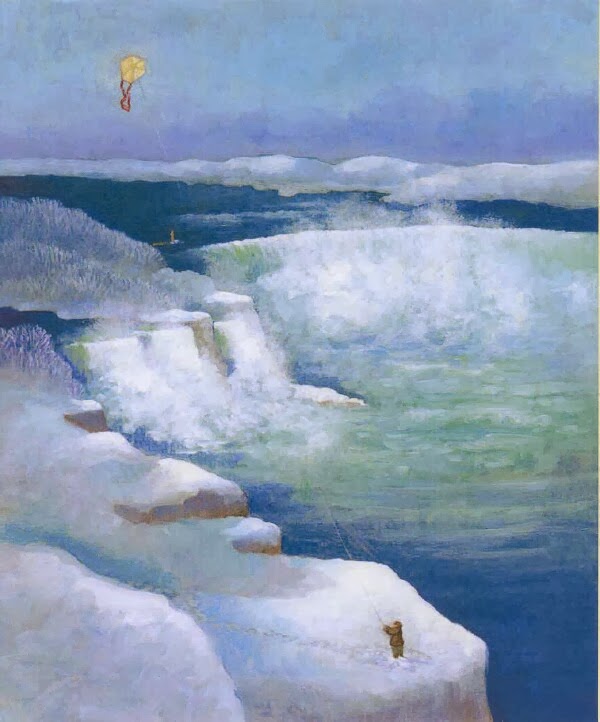 ’s history is ingrained in me after having lived in for so many years. I used to work with historical and art museums there, and conducted workshops for teachers on local history. Even my first published books were about ! I’ve done extensive research about the , traveled every mile of it, and love that whole period of growth in the mid-19th century when there was such an influx of immigrants and an explosion of innovation.  I travel back to Central New York each year, but I took an extra trip to visit again to see it through a writer’s eyes. I realized that the word “awesome” was invented to describe the falls!

Your language is so lyrical. It creates such drama:
As inky night spilled on the sky, the river, and the land,
The cold air claimed our hands, our feet—
And contestants dropped away.
I stomped to keep my body warm and pulled my woolens tighter.
Then through the dark, two bonfires bloomed—
First one side, then the other.
The crowds were with me! They urged me on…
How did you use revision to develop your book’s voice?
Revision is a form of play for me. I play with voices, images, verbs, similes and metaphors. I rearrange sentences and paragraphs for impact. When I finally decided to tell the story in Homan’s voice, I went back to my earlier attempt, which was told in poems – and robbed it.  Since poetry is the best way to express emotion, I lifted text from that version and used many elements in my newest draft.

How have young readers reacted to The Kite That Bridged Two Nations? 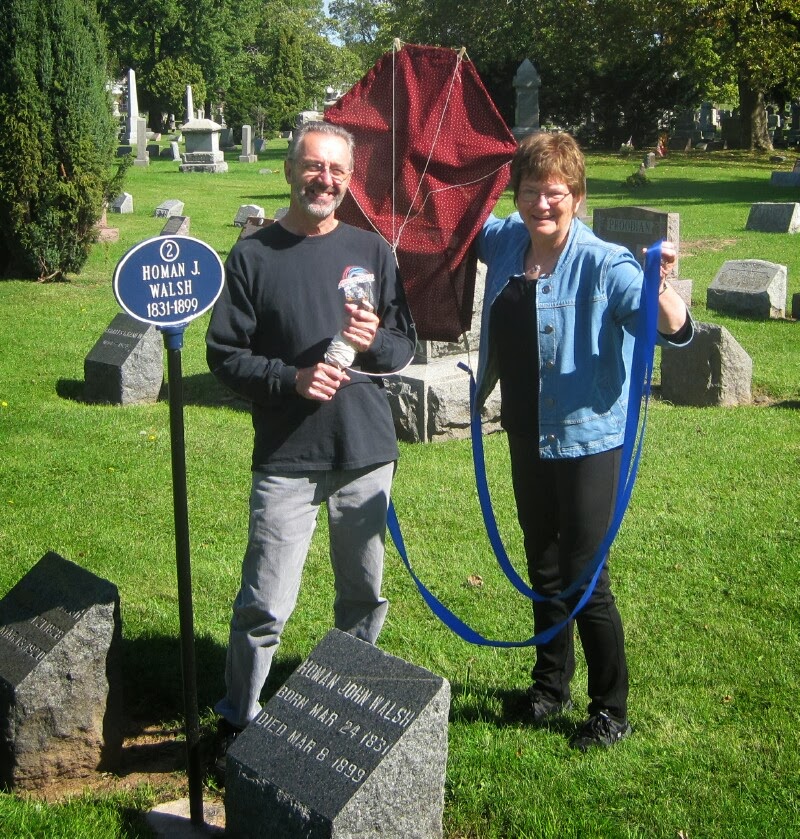 Here’s an example:  When I do school assemblies, I bring along a replica of that a kite expert made for me. One day, I walked onto a campus, kite in hand, heading toward the multipurpose room. As I approached the door, I heard a young voice shout out, “Look, look, Ms. Sanchez! She brought !” When the characters become that real to readers, that’s when I know my story is a success. 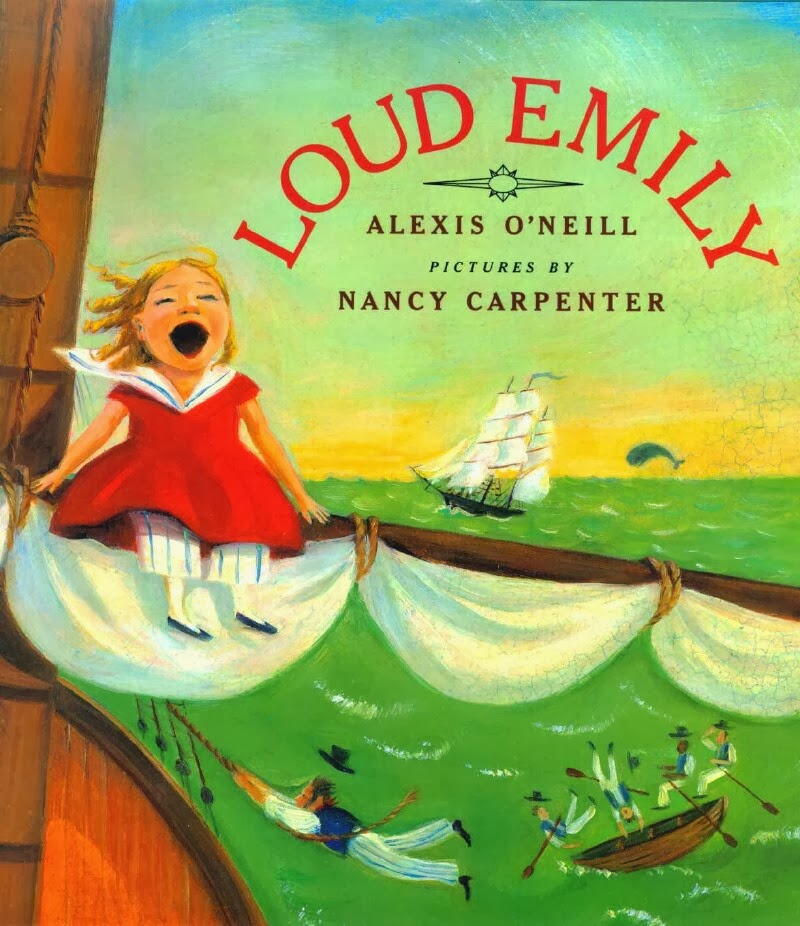 Each of your books is very different. Loud Emily is a tall tale set in a whaling town. The Recess Queen is realistic fiction about bullying. The Kite that Bridged Two Nations is historical fiction. What was it like working on these different kinds of projects? Do you see any strands that unite all your work? 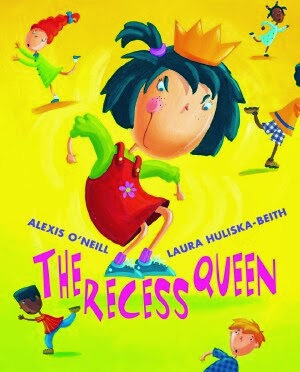 Language. I love playing with language. Sailors’ commands in Loud Emily. Made up words in The Recess Queen. Vivid verbs in The Kite That Bridged Two Nations.  I love playing with sounds and images, and to do that fully, I keep playing with different kinds of projects.
What can we expect from you in the future? What are you working on now?
I’m working on a picture book biography, a chapter book fantasy, a tween novel and a nonfiction book set in – guess where? – .  Bets are on as to which I finish first!
Is there anything else you’d like to share with our readers?
Yes! I have three cats, am learning to play the ukulele, and dream of being locked in a library overnight with a flashlight, cats and lots of chocolate.


Thank you so much for being my guest, Alexis! Readers can find out more about Alexis O’Neill and her work at http://www.alexisoneill.com/
Posted by Linda Crotta Brennan at 8:45 AM 11 comments: