I don't usually see myself as a funny writer, but Ellen Wittlinger's (http://www.ellenwittlinger.com/) talk at SCBWI's Encore on humor got me thinking.
She says that humor often has:
1. exageration,
2. surprise
3. recognition.
So I challenge thee and me to come up with a humorous scene by next weekend.
Posted by Linda Crotta Brennan at 3:38 PM No comments:

This plot challenge really helped me over a hump. In his book Writer's Workshop, Stephen Koch says you have to write your way through writer's block and this exercise helped me to do that.
So let's all think on our keyboards!
Posted by Linda Crotta Brennan at 4:43 PM 2 comments:

I even came up with an extra plot idea--of course they're not equally enticing, but here goes:

Plot #2: Aggie and her mom often laugh about how uncoordinated they are, but it's not funny when Aggie's mom slips on the ice and ends up in traction. Aggie's father's sister, figure skater Celina Valska, comes to take care of Aggie. Aunt Celina, who missed an Olympic medal by a tenth of a point, and was knocked out of this season's competition due to an injury, has issues of her own.

Plot #3: When Lester carves the top off of his halloween pumpkin, a little man pops out who gleefully cries, "I'm free!" and scampers away. An army of beings tramp through Lester's kitchen. They tell Lester that he's released a Puckling and recruit him to track down the prankster. Chaos ensues, but in the end, Lester realises that life is more interesting spiced with a bit of mischief.

Plot #4: Shy Shannon's outgoing online persona couldn't be more different than her real personality. Pretending to be someone she isn't is fun until her online buddy Connor announces he will be attending Shannon's cousin's wedding. Who will the real Shannon Walton be when her worlds collide?
Posted by Linda Crotta Brennan at 9:42 AM 2 comments:

Okay, here's my first plot idea:
Nine year old Jack Ward wakes up to discover his wandering tinker family has vanished, leaving him alone with his pony. He sets off across the Burren to the tiny coastal town where a small girl once offered him a kindness, in search of his family and who or what caused their disappearance.

I'm not sure that this qualifies as "high concept," but it grabbed me...
Posted by Linda Crotta Brennan at 12:27 PM 2 comments:

Finally figured out how to post the cover of my latest book! 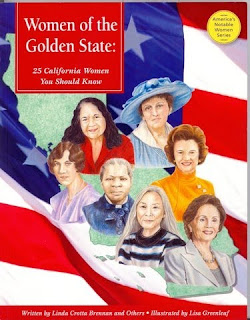 Posted by Linda Crotta Brennan at 8:36 AM No comments:

At last Saturday's Encore! author/editor Lisa Papademetriou
Lisa also spoke about how editors were on the lookout for "High Concept" plots, or ones with wide commercial appeal.
So here's my challenge--by Tuesday, come up with three high concept book ideas...notice that I'm giving you more time than Lisa's editor did!
Posted by Linda Crotta Brennan at 8:32 AM No comments:

I opened my mailbox and what was inside? The advance copy of my latest book, Women of the Golden State: 25 California Women You Should Know. It was so exciting to hold this first copy in my hands. I waved down the neighbors driving by, bursting to share my news.
The cover announces that the book was written by Linda Crotta Brennan and others--this was a collaborative effort. I wrote three of the biographies in the book, Dian Fossey: Protector of the Mountain Gorilla, Dorothea Lange: Changing the World Through Photography, and Maud Younger: Millionaire Waitress.
You can find out more about Women of the Golden State, and the other titles in the American Notable Women Series at the Apprentice Shop Books website, http://www.apprenticeshopbooks.com
Posted by Linda Crotta Brennan at 11:21 AM 2 comments: