I want to welcome Jeannine Atkins to my blog for my first ever author interview.

Jeannine Atkins is the author of picture books including AANI AND THE TREE HUGGERS, MARY ANNING AND THE SEA DRAGON, and most recently ANNE HUTCHINSON’S WAY, which was named to Booklist’s 2007 Top Ten Religion Books for Youth.

In 1643, the Hutchinson family sailed from England to the Massachusetts Bay Colony, hoping to find religious freedom. Soon Anne Hutchinson was forbidden to speak about Scripture in her home. She spoke anyway, and was put in jail. The picture book, told from the point of view of her young, proud, and worried daughter, Susanna, shows Anne’s strong faith as she practices and defends free speech.

What about Anne Hutchinson attracted you? Why did you decide to write about her?

I was aware of Anne Hutchinson growing up in Massachusetts, and she kept returning to my attention as years passed, as if nudging me to learn more about her. At last I paid attention to the nudges and read biographies to understand some of her special qualities.

Why did you choose to write a picture book about her instead of a longer book?

I love the way a picture book may capture the essence of a person by focusing on a few important incidents. And of course I love the way great pictures can quickly fill in a lot about a time that’s so different from what’s familiar to us. While all the details of Anne Hutchinson’s story are important, I wanted to distill from what’s known to highlight her courage and its price.

Anne had a very complex life. She held firmly to her beliefs, though they differed from others. She refused to be silenced, even at great cost to herself and her family. How did you present Anne’s life so that would be accessible picture book readers?

I chose to tell Anne’s story through the point of view of one of her children, to focus on the pride they surely felt along with a yearning to have more safe time with her. I think that mixed feeling of being glad your parent has a good life in the world, while wanting more ordinary time just to be with them, is something many children feel, though not to this extent.

Was it a challenge to talk about religious issues in a secular book? You did so with such grace—how did you approach this?
The difficulties were in trying to find simplicity in what’s complex, which is often the task of the picture book writer. There are many huge books outlining interpretations of scripture that tore apart some communities, and I didn’t want to go there! I struggled to define Puritanism in a sentence.

What special difficulties did you face in writing this book?

I wanted to make the language sound as if it had been spoken a long time ago, yet still be easy enough to understand. And as you mentioned, this book is about a religious drama but it’s intended for readers from any religious background or none. It’s set in a time when religion shaped almost all life choices and consequences. I wanted to convey that without going into the intricacies of theological differences that most children wouldn’t know about.

There is some debate about where the line should be drawn between fiction and nonfiction. What are your thoughts on this? What is your definition of “creative nonfiction”?
I’m an advocate of taking historical facts and working them into scenes based on what we know about a person and a time. I think strategies such as inventing dialogue help readers feel as if they were there, and then, having made that emotional connection, perhaps go on to explore views of history.

How was this book similar or different than the other books you’ve written?

I’ve often been attracted to theme of learning what is true for you and staying loyal to it; that’s something that starts for us when we’re young and continues all our lives. And growing up when women weren’t featured much in history texts, I try to “write women back into history.”

What were your special joys in writing this book?

It is a joy to answer the nudge I mentioned at the beginning of this interview. To say – all right, I’ll pay attention! And then to get to spend months with such a heroic woman and family; that was a joy and an honor.

Thank you for asking such interesting questions, Linda! Oh, and there’s always: what’s next? In April 2010, Henry Holt Books for Young Readers will publish my first book of poetry, Borrowed Names: Poems of Laura Ingalls Wilder, Madam C. J. Walker, Marie Curie and their Daughters. You can learn more on my website at www.Jeannineatkins.com or read my blog, View from a Window Seat, at http://jeannineatkins.livejournal.com

If you were anticipating my interview with Jeannine Atkins, I apologize. I was called away precipitously when my father became seriously ill. He passed away this Tuesday after a long and love-filled life.
Jeannine and I have rescheduled her interview for Friday, May 1st. We'd love to have you join us.
Posted by Linda Crotta Brennan at 3:11 PM No comments:

On Friday, April 17, I'll be hosting a blog interview with children's author, Jeannine Atkins. Her titles include Aani and the Tree Huggers, Mary Anning and the Sea Dragon, and most recently, Anne Hutchinson's Way. You can visit her website to find out more about her at www.jeannineatkins.com
Hope you'll join us!

Posted by Linda Crotta Brennan at 9:30 AM No comments: 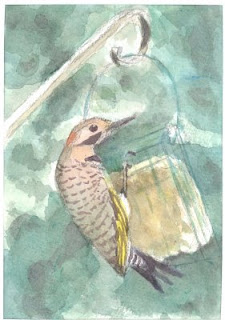 I figured out how to add an image! Hurray for me!
Here's a sample of my art from the show.
Posted by Linda Crotta Brennan at 11:51 AM 2 comments:

I always said that when I retired, I wanted to paint bad watercolors. Well, I haven't retired yet, but my husband bought me paint and I took a few lessons. You can see the results and judge for yourself!
Two of my paintings will be hung in Carole Berren's show:
Please join Carole Berren and her students for our annual exhibition:
Cranston Public Library Art Gallery
140 Sockanosset Cross Road
Cranston, RI 02920
(401) 943- 9080
Opening Reception: Sunday, April 5, 2009 2-4 PM
Exhibition on view through April 30, 2009
Hours: M-Th. 9AM - 8PM; F-S 9AM - 5PM; Sun. 1- 5PM
Posted by Linda Crotta Brennan at 11:47 AM No comments: