In honor of my upcoming guest, poet Diane Mayr, I thought I'd share this holiday poem with you:

Whap! He whales the whiffle ball into the neighbor’s bushes
And runs wrong-way round invisible bases.
His thin body, stretched by a recent growth spurt
Can’t contain the life in his swinging arms and pumping legs.
Just before first base, he swerves,
Pouncing on the lounging golden retriever.
Boy and dog wriggle, wrestle, roll in the grass,
Then the boy pops up and continues his counterclockwise circuit.
Home run!


Diane Mayr will be stopping by on December 1, when she'll be talking about her online poetry collection: Kids of the Homefront Army: Poems of World War II, http://homefrontarmy.blogspot.com/. 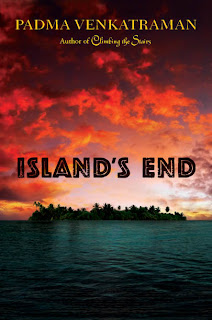 Today I’d like to welcome Padma Venkatraman, author of the award-winning novel, Climbing the Stairs. She’s here today to discuss her new book, Island’s End. Thank you for joining us, Padma!

I’m fascinated by your far-ranging physical and spiritual journeys. You weren’t originally a writer. In fact, at nineteen, your passion for mathematics and science led you to leave your native India to pursue a graduate degree in Oceanography in the United States. 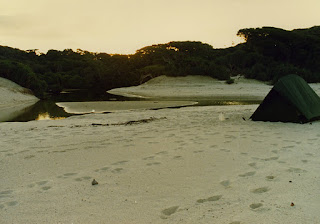 As an oceanographer, you conducted research on crocodiles in the Andaman and Nicobar Islands off the coast of India. Your contact with the tribal people of these islands inspired Island’s End. Can you tell us about your stay on these remote islands and the people you met there? (The photos on this blog are from Padma's trip to the Andaman and Nicobar Islands.)
Living on the Islands was one of the most amazing experiences I've ever had. Life had a different pace there - it felt calmer - and when I lived there in a tiny little cottage near the rainforest with next to no possessions, I felt far more satisfied than I imagined I could be. I loved the simplicity and warmth of the people I met while I was there. 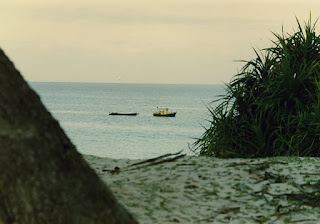 Though you were a scientist, you always had a great love of literature. Your first books were nonfiction, biographies of women mathematicians and scientists. You also wrote folktales and eventually you evolved to writing novels. Could you tell us about your transformation from scientist to writer?
My love of words was and is far deeper than my love of numbers (though I do love that world as well). But at first, writing was a sort of hobby to me - something I enjoyed doing in my sparetime. And I don't consider anything that was published before my debut novel, CLIMBING THE STAIRS, appeared to be examples of me as a writer. I only took myself seriously as a "writer" during and after CLIMBING THE STAIRS appeared - and the novel is of a far higher standard (in my opinion) than any piece I did before it -I call it my first book because it feels like my first real work as a writer - what I did before seems like play, and just not comparable with my novels - which reflect the real writer me. And now that ISLAND'S END is here, I know for sure, I'll always see myself as a writer. Science fulfilled my intellect alone, writing fulfills me more deeply and completely. 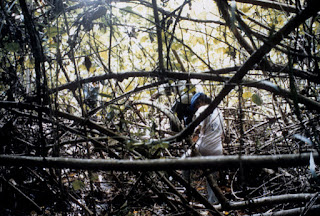 You were the only woman on the research team to the Andaman Islands, and both your novels have featured strong female heroines. Do you feel a kinship between Vidya in Climbing the Stairs and Uido in Island’s End? Do you see echoes of these girls in your own life?
Undoubtedly, my experiences as a woman in a male-dominated field enter my writing. When I was writing ISLAND'S END, I was going through a lot of self-doubt about my writing abilities - and I think Uido's initial concerns might reflect my own lack of confidence. Then again, I wrote ISLAND'S END because I felt like I was hearing a voice that was telling me her story - an almost surreal experience - so sometimes I feel like "the voice" wrote the story - that it doesn't really "belong" to me - though it was through me that the story was written. I love the process of writing - especially this "hearing voices" thing. Sometime I think writers are schizophrenics who shut themselves up with a computer when they hear voices... 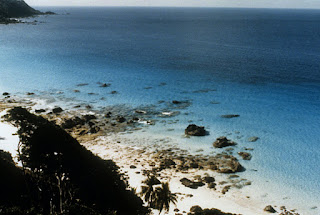 In some ways, Uido is the opposite of a scientist. As a shaman-to-be, she learns through dreams and spirit guides. What do you see as the relationship between science and spirit? How have these two ways of viewing the world informed your writing?
My time on the ISLANDS opened up my mind - and expanded my world view - and taught me to respect and give credence to ideas/experiences/cultures that existed beyond the mind-set and framework of science. I think I've inherited, from the Hindu tradition, a sense of spirituality that embraces and respects all paths to the higher goal of living a better life and being a better person. Spirituality and philosophy interest me - and I have a sort of scientific curiosity about different ideas of spiritual truth and reality. My scientific training also gave me the gifts of questioning and rewriting. My characters often embody questions that interest me - and as I rewrite I ask my characters lots of questions so I feel like I deeply know them - questioning helps me occupy their emotional space. 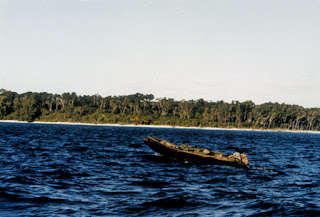 Can you tell us about your process in writing Island’s End?
Writing ISLAND'S END was different from writing my first novel - in part because I had a child (who took up a lot of my time and energy, so "real life" often intervened and it was a challenging to find the time and mental space to live inside Uido and her world). But then again, writing it felt magical, because I had the incredible feeling like I could hear the voice - a voice that sort of possessed me - in a marvelous and refreshing sort of way.

You’ve already begun another novel. Could you tell us a little about it?
My third novel, tentatively titled A TIME TO DANCE, is inspired by someone I knew - a dancer who overcame physical disability to excel at what she loved most. I'm working on it with my wonderful editor Nancy Paulsen (who also helped ISLAND'S END come alive) - and the novel will appear on her list (Nancy Paulsen Books). 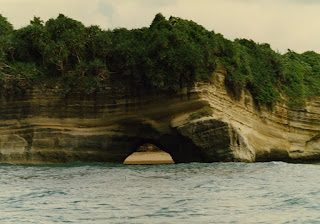 Do you have any final words for our readers?
I fell in love with the process of writing as I wrote my two novels - so that's when I started to consider myself a writer. To me, equating publication with being a writer is as silly as confusing marriage with true love. Just as marriage isn't necessary for true love to exist - publication isn't a necessity for a writer. Publication - and everything that goes along with it, like acclaim and awards are a wonderful gift for a writer - but shouldn't be any writer's end goal. A writer's goal should be to remain eternally in love with the writing process. 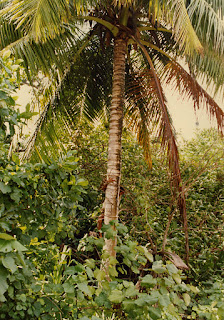 I'd love to invite your readers to stop by my website www.padmasbooks.com - and to download the virtual lesson plan I created and the fabulous discussion guide my publisher Penguin created. Even if they aren't thinking of using ISLAND's END in a classroom or book club setting, I think some of the exercises are fun - my favorite is one that I did because a teacher who read my book pointed this out to me. Uido, Lah-ame, Danna and Ashu - were, in my head, associated with water, air, earth and fire - and interestingly, the language I ended up using (metaphors, verbs etc) to bring alive each of these characters keeps the association with these 4 "elements" - a really interesting aspect of pattern in the novel that I enjoyed (re-)discovering! Thanks again, Linda, for inviting me to be on your blog!
Thanks so much for stopping by! I know our readers will enjoy Island’s End.


Posted by Linda Crotta Brennan at 9:18 AM 6 comments:

Today I completed my poetry challenge, writing a poem a day for a month. I can't say I came up with anything extraordinary, but I enlarged my knowledge of language and how it can be used to specific effect. I became more attentive to the world around me. I plan to keep up this practice of poetry, with the help of a book recommended by Kim Newton Fusco http://www.kimberlynewtonfusco.com/, In the Palm of Your Hand by Steve Kowit.

Here is one of my better poetic attempts:

Zucchini like zeppelins
My table sags under their weight.
We slice them,
Stuff them,
Grate them,
Bake them.
Zucchini breads,
Zucchini cakes,
Zucchini pies,
Until the vine shrivels up and dies.

While I'm continuing my poetry, I'm going to have to take a break from blogging due to a writing assignment. But before I go into writer's hibernation, I have one more author interview to share with you. On November 16th, I'll be talking with Padma Venkatraman http://www.padmasbooks.com/ about her latest book, Island's End. Hope you can stop by!


Posted by Linda Crotta Brennan at 5:30 PM No comments:

I recently read Roger Sutton’s editorial in Horn Book www.hbook.com about how the picture book is in trouble. Sales are down. Parents are shunning picture books and reading chapter books to their preschoolers instead. Sutton believes that “there is a disconnection between what is in our hearts and what we are publishing for children.” I wonder if part of the problem is the demise of the picture story book. When I started in this business twenty plus years ago, the average length of a picture book was 1200 words. And it was common to have picture books of over 1500 words. But current editorial wisdom says that families with two working parents are too busy to read such lengthy books. The cut-off for picture book manuscripts keeps getting shorter and shorter. Jennifer Laughran, agent at Andrea Brown Literary recently wrote on her blog that 300-550 words is the “sweet spot” for picture books. She advises her clients not to submit books over 800 words. http://literaticat.blogspot.com/2011/05/wordcount-dracula.html Now talented writers have been able to create incredible works of art within these tight constraints. But some stories need more elbow room. And while 300-550 word stories may be fine for the three year old, many that are being published today don’t have the depth to hold up to hundreds of readings by a five or six year old. I imagine parents in these tough economic times flipping through a book with a dozen words per page and wondering if it’s worth $16.99. Perhaps it’s time to bring back the picture story book. In a culture that is so visually oriented, wouldn’t it be wonderful to create longer, richer texts with luxurious illustrations that can bridge the gap between the short picture book and the chapter book. As for those busy parents, surely if they have time to read a chapter to their preschoolers, they’ll find time to read a 1200 word picture story book.
Posted by Linda Crotta Brennan at 3:43 PM 4 comments: