Lynda Mullaly Hunt Interview: One for the Murphy's 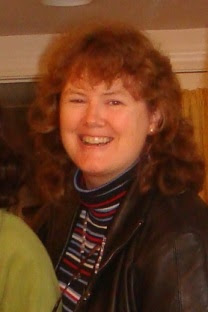 In the wake of heart-breaking betrayal, Carley Connors is thrust into foster care and left on the steps of the Murphys, a happy, bustling family.

Carley has thick walls and isn’t rattled easily, but this is a world she just doesn’t understand. A world that frightens her. So, she resists this side of life she’d believed did not exist with dinners around a table and a “zip your jacket, here’s your lunch” kind of mom.

However, with the help of her Broadway-obsessed and unpredictable friend, Toni, the Murphys do the impossible in showing Carley what it feels like to belong somewhere. But, when her mother wants her back, will she lose the only family that she has ever known?

You can view her book trailer here: http://www.youtube.com/watch?v=pBFUPBw7KLI 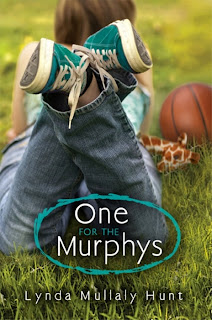 1. Is it true that the idea for this book actually pulled you away from washing dishes? Can you tell us a little about your inspiration for the book, and the path the book took as you developed it? Were there false starts and revisions along the way or did it pour out seamlessly?

I was actually working on what will probably end up being my third book. I stopped writing it to begin Murphys. My exasperated writing partners couldn’t understand why I would jump from a book that had some editor interest to write this one. I finally told them that it was the book I was afraid to write and so I thought it time that I just do it.

Once it started, it poured out (Although all of the chapters were written out of order!). Although my editor, Nancy Paulsen, asked me to significantly cut the word count, and then deepen the characters of Mr. Murphy and Toni, the book was published pretty close to its original form. (Although, those are big changes huh? )

As far as inspiration, many things came together to create a book about a self-protective kid in foster care.

The first piece was that I lived with another family for a few months when I was young. Staying with that big, bustling clan gave me a close look at a kind of life I had not been familiar with—but the kind of life I knew I wanted when I got older. The first night I was there, I leaned forward and stared down the center of the dinner table. I heard myself say, “So, this is what it’s supposed to look like.” The time in that home changed my view on what my life could hold. And all of its possibilities…

Also, only months before starting One for the Murphys, I’d seen the Broadway show, “Wicked”, and was struck by several elements in the storytelling. First off, the writing and music are incredible! I thought a lot about the idea of “Defying Gravity” since I’ve had my share of doing that. I played the Wicked soundtrack while writing a good chunk of the book which is surprising, as I usually cannot write while listening to music with lyrics. However, it seemed to propel the story forward.

Following this trip to see, “Wicked,” I had a conversation with my nine-year-old son about Luke Skywalker of Star Wars and how, in one sense, he wanted to have Darth Vader be his father, yet also wished it away. I began to think about what that would be like. To long for something and wish it away at the same time.

And then, yes, Linda…about two weeks later, while rinsing a plate at the kitchen sink, I heard Carley speak the first line in my head. I “tore myself away” from the dishes to write the first chapter of what would become One for the Murphys. Once that was done, I just had to finish it—like having a sliver in my hand. Painful, at times, but I just had to get it out. The book was finished in ten months. However, revisions would follow. Don’t revisions always follow?

2. You’ve said that a wish underlies everything you write. What is the wish underpinning One for the Murphys?

I guess the wish would be that someone had taken me aside when I was twelve and told me the things that Mrs. Murphy helped Carley learn. I would have worried a lot less about the future. Having a compass is so important for kids.


3. Heroism is a major theme in this book. Who are the heroes in this story? Are they modeled after any heroes in your life?

Well, I have been working on the teacher’s guide and this is a question in there! Really, there are few characters in the book that aren’t heroes in one way or another.

Mrs. Murphy is modeled after a teacher that I met as a young teacher. She was twenty two years older than me and taught me a lot about the world. About marriage and teaching, and raising children. She also demanded that I look upon myself differently than I had.

Carley is me. The facts of the story are made up but her emotional journey is one that I have taken. Some of my friends in SCBWI know this. I think it’s heroic to come out of any difficulty life hands you looking upward and to the future. Opening myself up to Carley and the other characters in One for the Murphys was the last leg of that race.

4. Wicked plays a big role in this book. What drew you to the play personally? What does the play mean to Carley?

Well, I think we all feel like we don’t fit in at one point or another. I guess this is what drew me to the story. I loved Elphaba from the beginning—not because she didn’t belong, but because she is a fighter. Because she speaks up for both herself and others who have no voice. Because she is tough yet deeply vulnerable.

At the end of the first half of Wicked there is a song entitled, Defying Gravity—I have never seen anything so visually, musically, and emotionally stunning. I love the message of rising above the difficulties in your life. Let’s face it—it’s necessary to have a happy life. But let me be clear—rising above is not the same as forgetting or dismissing.

And, that’s what it means to Carley. 

5. Are you working on another book? Can you tell us a little about that? Is the process different than what you went through writing One for the Murphys?

I am working on another middle grade entitled ALPHABET SOUP. It is about fifth grader, Lucy Nickerson, who is growing up in 1973. He beloved brother is in Vietnam and she is always in trouble at school, as she uses misbehavior to hide the fact that she can’t read. However, she finally comes across a young teacher who sees through her bluster.

The process is the same—a bit nutty! I typically write the initial three chapters first, then the final chapter and then I spend the rest of the time connecting the beginning to the end. A strange process but an effective one!

6. Is there a question you’d like to answer that I didn’t think to ask?

Well, actually, I’d like to know a little more about YOUR Earth Day book that is coming out in the spring. Care to give us some details???

And to answer Lynda's question, When Rivers Burned: The Earth Day Story, the story of the creation of the first Earth Day, should be out next spring.

Thanks to both Linda and Lynda for this great interview. I'm going to send the link to my 91-yr-old mom, who read One for the Murphys after I did and loved it too. And Lynda, Wicked is my all-time favorite! Defying Gravity defies description, yet you have managed to articulate why this particular song transcends all others sung on Broadway.
Looking forward to next books by both interviewer and interviewee!


Thanks, Linda. I really enjoyed doing this interview. :-)

Thanks, Janet! I'm so pleased to know that your grandmother liked Murphys! That's awesome! And, yes, Wicked is really beyond compare as far as Broadway shows go. (Although I love Phantom, too) Hoping our paths cross in "real life" soon. :-)

I had to go listen to Defying Gravity on YouTube--never have seen Wicked on stage, although I loved the book. What a great inspiration!

I love the image of you looking down the dining room table--a real throat-catcher.


Thanks so much, Ellen! Perhaps, I'll have to go watch that video now. :-) (Of course I know you like things that fly :-)

Thanks for the interview, Linda and Lynda! I always enjoying hearing about the creative process.

Thanks for this great interview, Linda. I love ONE FOR THE MURPHYS!