I've been invited to take part in a Historical Preservation Panel as the local "noted author of children's history books." Here are the details: 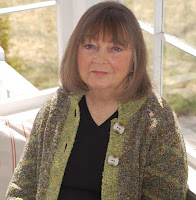 Your main characters are three very different young women. You attended a boarding school as a day student. Were these characters based on your experiences there? How were their lives similar and how were they different?

My characters were totally from my imagination, but their interaction and the internal workings and life of the orphanage were based in part on what I know of boarding schools that house girls far away from home. In an all girls’ school there are always those who get crushes on other girls. Anetta’s crush is a good deal more serious than most of these and definitely not a phase. The girls where I went to school usually had two parents and more freedom than my characters, especially the day students. They did not need to rely so heavily on one another. And there was certainly not the emphasis on music (in fact there was very little of that as I recall) or the so-called womanly arts, although we did have to attend something called “Social Forms” and were required to wear very unattractive uniforms and obey some fairly strict rules.


Each girl has a different fate within the confines of her times and social circumstances. Yet none lives out the Cinderella version of happily ever after. Was that a deliberate choice?
It was not a deliberate choice. As with most of my other books, although I have a fairly good grasp of the characters at the beginning of the process, I have no idea where the story is going and certainly not what the ending will be. I did intend that the ending leave something to the imagination and provide realistic outcomes for all three girls.


Most books portray orphanages as harsh, evil places, yet here the orphanage was a refuge which provided vast opportunities to young girls without families. Could you tell us a little about that?
I had a decision to make at the beginning as to whether or not I wanted the drama in my story to be caused by a restrictive institution or if, as it seemed to me from all that I had read, I should characterize the ospedale as a nurturing place. I decided on the latter and on allowing the girls to live out their own story, make their own choices, and provide their own theatrics.

You went to Venice to research this book. Could you tell us a little about that?
It seemed absolutely necessary that I go to where these ospedales had been prevalent and see as much as I could of the city of Venice first hand. I found the Hotel Metropole on the site of the old Ospedale della Pietá, observed the views from the windows that the girls would have looked through, saw the birthplace of Vivaldi where he lived through much of his adulthood and the streets he would have taken to arrive at work. I also toured the nearby doge’s palace, St. Mark’s Church and square, and the Cá Rezzonico, a museum of the 18th century. The character, Rosalba, was actually named for a famous pastel artist of the time whose work adorns the museum. There were so many things –surprises such as an original covered gondola from the period and an exhibit of 18th century instruments - that I would not have known about if I hadn’t taken this trip. In short, I would not have been able to write this particular book without such on site research.

What drew you to 18th century Venice?
When I first heard about Vivaldi’s role in the life of these girls and learned about the foundling wheel, I knew there was a story there that I wanted to tell. That, and my love of baroque music, drew me to 18th Century Venice.


What was the “Social Service System” in the Republic of Venice under the doge?
There were many foundling children in Venice – often bastards of profligate dukes – at the time of my story. The orphanages, or ospedales, took in older youngsters and answered the Republic’s problem with abandoned babies. By virtue of the foundling wheel, where infants were deposited with no questions asked, the girls and boys had the promise of a better life than being raised by a single woman or extremely poor family. The social service system of the time instituted a board of governers who oversaw these orphanages and made the rules. Music was an integral part of the life of Venice and of other Italian cities that had similar institutions, and it was decided that a musical education would be provided to some degree for all the children in these establishments and, to a greater degree, for those who had special gifts. Though Italy was a Catholic country, from what I could gather from my research, these were not convents and I tried not to portray it as such.


Vivaldi and his music are a central part of this book. What drew you to this man and his music? How have teen readers responded to this aspect of the book?
A popular composer, Vivaldi’s music is played daily on classical music stations that I listen to. I have always loved the Baroque, and the things that I was beginning to learn about him and his position at the Ospedale della Pieta intrigued me.

It is a little early to tell about the response. Teens and adults who are musicians seem to be drawn to it. Others read it for the story itself and the history.


This book concentrates on a small slice of Vivaldi’s life. Can you tell us what happened to him afterwards?
I purposely set the story during the early years of Vivaldi’s career when his own growing celebrity didn’t take him away from the Ospedale for long periods. During this, the earliest part of the 18th century, he was already becoming known in the world of opera, but it did not yet consume him. Later, he traveled throughout Europe with two of his students and there was a hint of a love affair with one of them. I really didn’t want to deal with that. As I say in my author’s notes, I wanted to focus on the orphans.


What do you think modern teens can take away from HIDDEN VOICES?
I hope that modern teens will learn from this story that in spite of cultural differences and the idiosyncrasies of other times and places, people’s emotions, needs and aspirations are basically the same. Deep friendships were formed then as they are today; a woman’s place in society was dominated by a male perspective, but there were opportunities for these girls none the less, often more so than in other periods of history.

How does this book fit in with your other titles? What are you working on now?
“Just Imagine” was my first book of historical fiction. It required little research because I was born shortly after the years of the Great Depression that I write about. If I needed to know about a detail or fact, I could usually find the answer by asking an older member of my family. “The Fattening Hut” was set on a mythical island, but based on a real place, Anguilla, that I traveled to in an effort to learn about the history, topography, and the flora and fawna. All of these figured into what I now think of as an historical fantasy.
“Hidden Voices” required more research than any of my other books except the one coming out in the fall called “Daughter of Winter”. That book is set in Essex, MA, in 1849. Essex is the next town over, so I didn’t have to travel far, but I probably did more intensive research for this book than for any other. Some of my picture books are also set in real places, but only two of them required much research – “Waiting for Baby Joe” and “Schooner”. In fact, some of the research that I did for “Schooner” was useful when I wrote “Daughter of Winter.” Presently I’m working on a memoir of my years as a child radio actress in Hollywood. It’s also a coming-of-age story and portrait of an ambitious and quirky family and magical place.

Could you tell us more about “Daughter of Winter”?
It's another historical novel - this time set in Essex, MA in 1849. The protagonist is a twelve year old girl whose father has sailed by schooner for the goldfields of California. Left completely alone when her mother and brother die, she keeps the deaths to herself until such time as the townsfolk discover the ruse and come to get her. She runs away before they arrive, however, choosing to try to survive by herself in the harsh winter landscape of the ship yards and Hog Island, where, with the help of a displaced Wampanoag Indian woman and an ancient ceremony, she eventually learns profound secrets about herself.

Is there something you’d like to say that I haven’t asked about?
Other writers may be interested in the way the story is told in three voices. I read many books written from multiple points of view to see how this could be done successfully. From the reviews I’ve seen, most readers feel the girls have very distinct voices. I had been worried about this because I was using the syntax and idioms of another time and society.

Thank you so much for joining me here. It's been a pleasure! If you'd like to find out more about Pat and her books, you can visit her website at www.patlowerycollins.com
Posted by Linda Crotta Brennan at 4:27 AM 5 comments:

Voice--out in the open and hidden

I had the most remarkable discussion with my good friend, and talented author/illustrator Cheryl Kirk Noll about voice. We discussed books that had it, and how we might develop distinctive voice in our characters. Cheryl has noticed that in novels with strong voice, the character's particular way of speaking is carried into the narrative, even in third person. She pointed to Katherine Patterson's Bridge to Terebithia as an example.

That brings me to Hidden Voices, a wonderful YA novel set in Baroque Venice. I'll be interviewing the author, Pat Lowery Collins, this Friday on my blog. Hope you can join us!
Posted by Linda Crotta Brennan at 7:00 PM No comments:

Please join us!
Posted by Linda Crotta Brennan at 3:56 PM No comments: